Have you ever wondered how to do this, well…look no further as I’ll show you.  It’s simple really.  All you have to do is download AddressBook2CSV Exporter from Antonio Lore‘s website.

After installing it, simply do the export, and then import into Gmail, which basically needs a CSV file; however, be forewarned…if some fields are empty, it may not look pretty after the import.  It’s easily fixable though.

I had numerous unused SMTP servers in my  Apple Mail list, so I decided to tidy up and found the following steps do it (yeah!):

That’s it, now when you go back to Apple Mail you’ll see a nice, pruned list.  BTW, you will only be able to delete SMTP servers that are NOT in use by any of your mail accounts.

Yowza! The iPhone can be hijacked? Tsk, tsk, tsk…not good, but not surprising either. Nowadays, more and more companies try to release more while downplaying quality – quantity over quality, which is a shame.

I’m not saying all corporations do this, but in general, yes they do. Apple should’ve spent more time testing this kinda stuff, rather than deploying early. But as they say, “strike while the iron is hot.”

I believe it comes down to the economics and logistics of the business culture in the twenty-first century.

This month a California-based startup plans to release an application that will allow Windows, Mac, and Linux users to run Linux binaries without any modifications.  Lina is a Linux virtual machine that allows users to run applications with the native look of their host operating system.  It also lets you install applications with a mouse-click, no need to compile software from source code.

Lina is still a work in progress, with no support for GTK+ or USB peripherals yet.  The virtual machine takes up less than 40MB when installed.

Apple has finally released a version of Mac Safari that runs on Windows. The look and feel emulates the OS X version pretty good; however, I’ve given up on it [and back to using Firefox]. There’s a lot of bugs that need to be fixed! For example, on dual LCD Safari will not maximize on the secondary monitor; I also get weird errors when viewing the Black Hat website; it seems too sluggish just like iTunes [on Windows]. 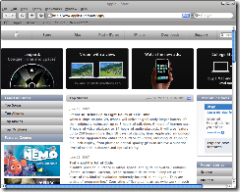 Understandably, it’s still in beta and can be excused…but thanks to Google, beta has pretty much lost its meaning these days… 😉