Just thought I’d share this with you…it’s a new kind of e-card that you can send to your loved ones.

To continue the humor of my Bug Fix Bingo post, here’s another illustration to show you how (software) project workflows currently work these days… =0) 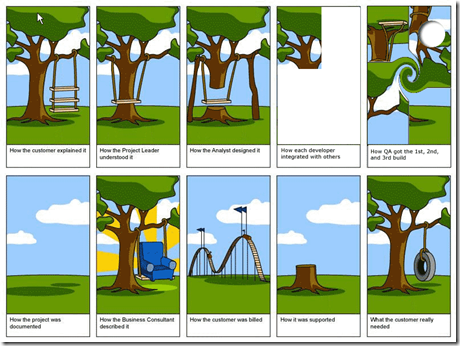 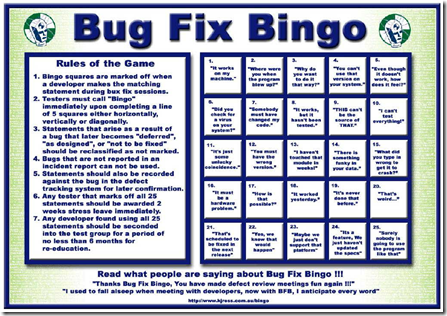 Here are seven “did you know” interesting computer facts (info consolidated from the CIO website):

1. What’s the closest computer to the North Pole?

2. What’s the farthest computer from Earth?

NASA’s Voyager satellite computes at the edge of space as we know it, which, BTW, has passed by Jupiter and Saturn – and it’s almost 30 years old.

3. What is the most intriguing data center?

Google, of course.  Located in Dalles, Oregon, on the banks of the Columbia River, 80 miles east of Portland, they house an estimated 500,000 around the world, spread across 25 locations, that stores and estimated 200 petabytes.  Also hydroelectric dam is used to power two four-story cooling towers.

4. What is the world’s largest scientific grid computing project?

The E-sciencE II (EGEE-II) project, launched on September 2006, for use by scientists around the world, used for large-scale scientific research projects in fields from geology to chemistry.  It processes 98,000 jobs a day, more than 1 million a month, juggling about 30,000 jobs concurrently, on average.

5. What is the world’s fastest supercomputer?

IBM BlueGene/L (BGL).  It is powered by 65,536 dual-processor computer nodes, and is located on a 2,500-square-foot marvel at the Lawrence Livermore National Laboratory in Livermore, CA.  It has been rated fastest in the world after clocking a sustained performance of 280.6 trillion operations per second, or teraflops.

6. What is the smallest PC to run Windows Vista?

7. What is the biggest paradigm change in Enterprise Software?

When you get bored and need a break from your development or IT-related work, use StumbleUpon.  It’s a Firefox add-on that can – and will probably – renew your perception of the Internet.

From StumbleUpon’s website: Channel surf the internet with the StumbleUpon toolbar to find great websites, videos, photos and more based on your interests. StumbleUpon learns what you like and makes better recommendations.

When you click the Stumble! button [on the StumbleUpon toolbar], it will route you to websites that are categorized under topics/interests you selected in your (StumbleUpon) account.  What’s cool about it also is that you can view and share websites that you (and your friends) rate.

Enjoy, but don’t forget to finish your work!  😉