If you’ve worked on text parsing projects – or an app that needed it – then you know what regular expressions are. It truly has been a lifesaver for me on many, many occassions. If, however, you haven’t dealt with it before, here’s some background on it:

According to Wikipedia, in computing, a regular expression is a string that is used to describe or match a set of strings, according to certain syntax rules.

For example, to capture the word Perl in the text below, you would use the following expression: .*(Perl).

How does it work?

A tool that I personally use to learn, construct, and test regular expressions is called: The Regex Coach. This tool offers many views to show how the regex engine parses text, which garners you knowledge on how it works internally, so you can write more advanced expressions. 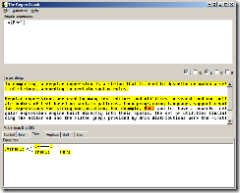 To end this post, I highly recommend reading Master Regular Expressions by Jeffrey E. F. Freidl to learn how/when to use it and the text-processing power it offers. This book, in my opinion, reads like a novel and is the best book on regular expressions.Take care! =0)

This site uses Akismet to reduce spam. Learn how your comment data is processed.